Soundroutes on “All about Jazz” 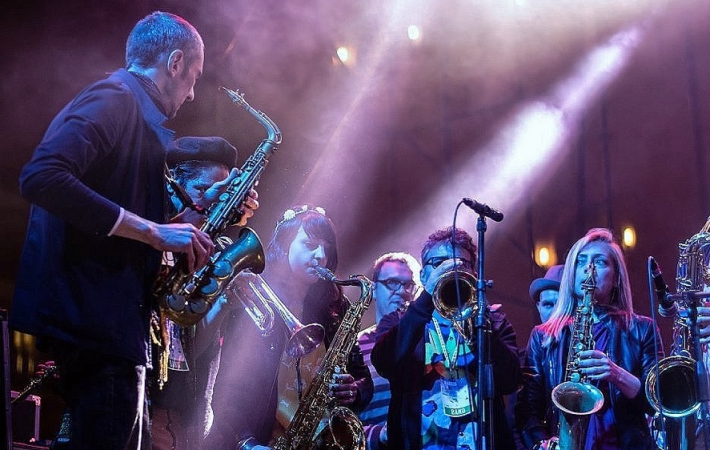 Soundroutes on “All about Jazz”

Great article by Arthur George about Soundroutes for  “All about Jazz” on line magazine.

World conflicts do not spare musicians. They are among the millions of displaced persons upon the planet. A refugee assistance organization in Europe which has assisted hundreds said an accurate total is impossible to know; one estimate put the number into the thousands. Many had been privileged in their home countries, highly-educated, middle class or more. None of them had planned to become refugees. Their difficulties, for employment, inclusion, cohesion, and preservation of cultures, may be eased by jazz initiatives.

Soundroutes is one such organization, networking musicians of very different international backgrounds in new homelands. Funding is from the Creative Europe program of the European Commission, the governing body of the European Union. The Soundroutes project created the Soundroutes Band, with members from scattered new domiciles in Berlin, Brussels, and Rome. Shalan Alhamwy on violin, Alaa Zaitounah on oud, and drummer Tarek Al Faham are all from Syria, Papis “Peace” Diouf of Senegal is on guitar. The group mixes tracks of Arab tradition and African rhythms, but leaps out to free jazz. In a related combo, Peace Diouf rearranges and composes powerful traditional Senegalese grooves as jazz with Roberto Durante on piano and Hammond organ, Giancarlo Bianchetti on guitar, and drummer Moulaye Niang,

Italian saxophonist and keyboardist Guglielmo Pagnozzi is the artistic director of the band, and Ivan Pivotti of the Marmaduke talent agency in Seville coordinates the overall project. Experienced in pre-bop to avant-garde, Pagnozzi built the band from an open international call. A Soundroutes booking venture, an internet-based virtual agency supervised by Pivotti and Marmaduke, has had hundreds of performers come through the organization, with featured performances in Berlin, Seville, and the Bologna Jazz Festival. There are also house sessions throughout Europe and other small presentations with a variety of associations.

An “Arab Song Jam” on the first Thursday of every month at the Werkstatt der Kulturen (“Workshop of Cultures”) in Berlin stages new interpretations of popular Arab songs and traditional works performed by musicians who have fled to Germany. This Arab Song Jam derives from an African-American tradition, Kansas City-like jam sessions of the 1920s though 1940s. The first set has a regular trio or quartet, while the second set opens to all familiar with songs from the Middle East, as if from a “Real Book” of Arab standards. Werkstatt der Kulturen will coordinate Soundroutes into 2020.

In Brussels, the band Refugees for Refugees was formed by Muziekpublique, a folk, dance, and world music organization there. Musicians from Syria, Tibet, Pakistan, Iraq, Afghanistan and Belgium assembled two CDs and toured on more than sixty concert dates. The band took members who were trained in classical conservatories in Aleppo, Damascus, and Baghdad, and combined that with nomadic Tibetan songs, and the rhythm and melodies of Middle Eastern “makam” modes. The group’s singer, Tibetan Dolma Renqingi (Aren Dolma) further developed some pop repertoires, from picking up musical tools and networks in Belgium. She grafted a sense of swing onto traditional Tibetan music.

Another Muziekpublique band, Blindnote, consists of musicians from Belgium, Senegal, Madagascar, Armenia, Turkey, and Mexico, not all refugees but all geographic transplants. A portion of concert proceeds is routed back to Africa to assist blind children. Also in Brussels, MetX uses concerts and open jams to present jazz directly involving musicians and sounds from Africa. The Mediterranean Music Institute of Berklee College of Music conducted a Refugio del Sonido (“Refuge of Sound”) in Spain, uniting Berklee students and alumni, some from war-torn nations, for a triple CD with sounds and instruments from around the Mediterranean.

The German Music Information Center (“MIZ,” for Deutsches Musikinformationszentrum) has on its website numerous music projects for refugees in Germany. Samspill in Oslo presents music from around the world across all styles, and accesses a network of multicultural musicians, some who have been refugees, a competence borne of experience. Saxophonist Mathilde Gross Viddal there conjured the project “Waffle and Falafel” to serve up mixed culinary and music tastes from Norway and abroad.

Shalan Alhamwy of the Soundroutes Band is a concert violinist, now also playing improvised music in Belgium. He is a former member of the Syrian National Symphony Orchestra, the National Orchestra of Arabic Music, and the Damascus Chamber Orchestra. When life in Damascus became too dangerous amid civil war, he moved to other cities as the fighting spread, and then out to Turkey. From there, a boat to Greece, walking ashore in water up to his neck. His prized violin had been left behind for safekeeping; it would not have survived the journey. Not until his mother obtained a visa to visit him did he reunite with the instrument he had left behind. Alhamwy’s journey, and the memories conveyed through his instrument, were chronicled in All About Jazz in 2017. Read our coverage.

Alhamwy keeps busy in Europe. He teaches and lectures on Arabic music. He plays with the Ghent Folk Violin Project; SEPO, the Syrian Expat Philharmonic Orchestra; with accordionist Jonas Malfliet in the Damast Duo, named after fine woven cloth originating in Damascus; and Picea Orientalis, a string orchestra of Western and Eastern music traditions. That orchestra uses Western structures, harmonies and bow techniques, together with Middle Eastern and Balkan ornaments and improvisations. It’s named after the Latin botanical term for the Caucasian spruce tree (Picea) native to northern Asia and the Caucasus (Orientalis) used for the tops of Eastern and Western stringed instruments.

Alaa Zaitounah, Soundroutes’ oud player, and his brother Sameeh both had their studies interrupted by the conflict in Syria. Alaa Zaitounah led an oriental orchestra there, performed on the oud in opera, rap, classical, oriental and choir music, and was about to complete a master’s degree in geophysics at the University of Damascus. Upon arrival in Berlin in 2016, he started a “Choir of Hope” to bring together those who sought refuge in Germany.

Sameeh Zaitounah had played viola with philharmonic orchestras in Syria and Lebanon and was about to complete his degree at the Higher Institute of Music in Damascus when the war forced his departure. He plays in his brother’s choir, and they both are in Musiqana, a band of other Syrians in exile, who play to the enthusiasm of other arrivals and the curiosity and fascination of Berliners. Abdallah Rahhal, lead singer of that group, explained how leaving Syria became necessary for him. With war, “everything changed. Suddenly everything is broken. War means you find someplace to save yourself.”

When Shalan Alhamwy reached Belgium, he resided in a temporary asylum center awaiting needed documentation. He contacted a local amateur orchestra, and obtained a violin on extended loan from a woman from the Netherlands. “She said play as long as you want.”

Musicians like Alhamwy, despite the difficulties of cross-border transit, may be more fortunate than others who move without a transportable skill. Improvisation in music allows creators of different regions to communicate non-verbally in collaboration. Notes transcend words. Musicians may find supporters through music.

“Music helped me to find my way,” Alhamwy recalls. He obtained that loaner instrument. Wim Wabbes, artistic director of the Handeelsbeurs Concert Hall in Ghent, Belgium, provided him with a musical position from which Alhamwy started networking to re-construct a career.

Alaa Arsheed is another Syrian musician, who fled to Lebanon after his family’s art gallery was invaded by hostile partisans and his father detained. Italian actor and director Alessandro Gassman encountered him while making a United Nations documentary on settlement camps. Gassman referred Arsheed to the Italian cultural organization Fabrica, which gave him a music scholarship to Treviso in northeast Italy. Then came the opportunity for a CD titled Sham, an older Arabic name for Damascus; next an alliance with Adovabadan, a swing and hot jazz band, its name in an Italian regional dialect from Bari in southern Italy.

“Music has always lived off benefactors,” observed Rabih Abou-Khalil, a 1978 émigré from Lebanon to Germany, in a conference on music across borders. He has been a member of Yo-Yo Ma‘s Silk Road Ensemble, and recorded for ECM with the album Nafas, and Al-Jadida on Enja with alto saxophonist Sonny Fortune. Abou-Khalil combines traditional Arab music with jazz, classical music, and rock; staccato Middle Eastern rhythms with jazz grooves. He admits his borrowings, describes himself as a “cultural parasite,” and rejects any notions of musical purity, even the idea of “real” or “traditional” music and a “pure” society. People have migrated throughout time and things changed all the time. Those who fear multiculturalism brought by immigrants and the erosion of “pure” societies or cultures are making a big mistake, he believes.

Diversity is not new. It has been the whole human saga. Europeans have always had different cultures, religions, and identities, shifting borders, movements of populations, ties through empire.

The Most Refugees Ever

The Europe Jazz Network (“EJN”) is an affiliation of 156 jazz promoters from 35 European countries. In 2004, a decade before there was a surge in immigration, EJN issued a “Manifesto:” anticipating historic changes to come. It said that “the main characteristic of jazz is its ability to integrate an array of human emotions through spontaneous composition and ever-flexible musical structures, which has broken through barriers of language, race and class…The openness of jazz and its thirst for diversity is a permanent self-expression against any kind of nationalism.”

Stefano Zucchiatti, communication manager for EJN, explained that the Manifesto had its roots in the centuries of European conflicts, histories that Europeans had experienced directly. The wars in the former Yugoslavia, from 1991-1999, were still fresh memories. The rise of nationalism, and politicians challenging the model of an open and multicultural European society, were already clear in 2004.

In 2015, as refugee migration was at its height, EJN produced another statement to follow on its Manifesto. It observed that border enforcement was becoming renewed due to the influx of refugees and migrants entering Europe, decades after the barriers between Eastern and Western Europe came down. Jazz, it said, “has always broken down barriers, developed new musical forms through collaboration between cultures, and provided a context in which musicians fleeing persecution in their native countries have been welcomed in other places where they can thrive and develop their art.” The network pledged itself to influence national and European policy and public awareness by demonstrating the benefits of cross-cultural collaboration. Out of that resolve have come the various efforts on behalf of refugee musicians.

The United Nations reports that at the end of 2018, there were 25.9 million refugees in the world, the highest ever seen; almost 71 million were in need for assistance from forced displacement; and 3.5 million persons seeking asylum from persecution. In 2015 and 2016 each, more than a million persons sought asylum in Europe, more than double of 2014. Numbers of asylum-seekers have now dropped to about a half million per year. Some who were able to flee earlier had already done so; others may have been discouraged by tighter immigration restrictions and the dangers of migration. Nearly 4,000 migrants and refugees perished while trying to cross the Mediterranean in 2015.