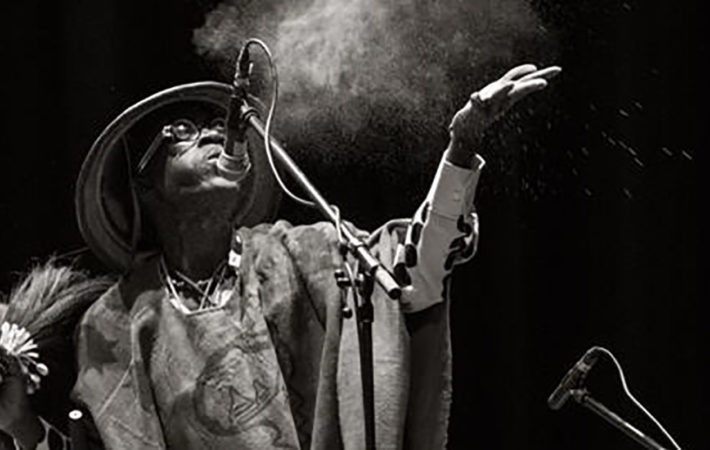 And for our last event for World Refugee Week, we travel to Bologna, to the International Museum and Library of Music, where Bologna Jazz Festival has hosted a masterclass on African percussions and traditional African instruments with Dudù Kouatè (Senegal) -who was later joined by Luca Bernard for the Blind Live Concert that we are offering to you today.

Dudù Kouate was born in Senegal into a family of griots, known for being the conservators of the African cultural and musical tradition. After his humanities studies in his country, Kouate left for Europe. He lives in Bergamo where he has been teaching African percussion for many years.

Don Moye. He holds seminars on the history of traditional African instruments trying to trace the territorial boundaries ofthe populations and spreading the African cultural tradition through tales of fairy tales set to music.

Multi-instrumental musician, he plays in various musical formations and beyond. He plays Afro-jazz, modern, traditional and contemporary music. The constant search for sound (sound of elements) always pushes him towards new and very interesting experiences in the world of music.

A recognised valuer of traditional instruments and especially percussion, he has managed to find their insertion within diversified musical contexts. In 2018 the album “Africation” was released in which Dudú interprets the role assigned to him by tradition and makes it re-live in a modern and multicultural key: in fact the songs are mainly sung in his mother tongue, Wolof, with some references to Bambaré and phrases in French and Italian, and express an intense emotional charge thanks to the use of new and original sounds.

Luca Bernard was born in Foggia, Southern Italy. He grew as a punk electric-bass player, yet dealing with the practice of improvisation from the very beginning.

Luca soon fell in love with doublebass and switched to it, dedicating himself to the study of jazz technique (with Pietro Leveratto in Siena Jazz and Paolo Ghetti at the conservatoire) and attending remarkable workshops, firstly in that cultural center known as “Popular School of Music Ivan Illich” in Bologna (city where in the meanwhile he graduated in philosophy and where he currently lives) with the likes of Barre Phillips, Tristan Honsinger, Eugenio Sanna, Scott Rosenberg and Thollem McDonas. Furthermore, the musical encounter with Anthony Braxton as well as the several times he crossed the paths with William Parker – with whom he had the opportunity to study with a scholarship in S.Anna Arresi Festival – came to feed his musical practice.

Involved in the educational programs carried out by the aforementioned Illich School and by the International Museum of Music in Bologna as well – where he conceives and leads a lot of musical workshops addressed to very different ages – Luca fairly moves where different arts meet, and lately has undertaken training classes in vocal and body expression (with Francesca Valente, Germana Giannini and Beatrice Sarti).

Main collaborations include performances of contemporary artist Francesca Grilli [“La Conversazione”, MaMBo_2010 (Bo), “IRON”, DroDeSera_2012 (Tn), 2013 Capital A (Amsterdam)];
Trainpainting, a performance where action-painting meets a impro-jazz trio (Bernard, C.Ferlaino & Giovanni Falvo with Paolo Parisi on brushes and canvas);
Boduàr, with multi-reeds player Luca Serrapiglio and Andrea Serrapiglio as sound engineer, in a piéce where the two Lucas are actors, singers, and instantaneous composers around the lyrics of poets such as M.Gualtieri, S.Penna, P.Cavalli, E.Sanguineti;
Mamamusica, an ensemble to perform music for infants and toddlers with their parents, giving music the power to enrich everyone’s life since the early childhood and restoring the social value of the chant.