Musical Diasporas – a journey through the music of North Africa 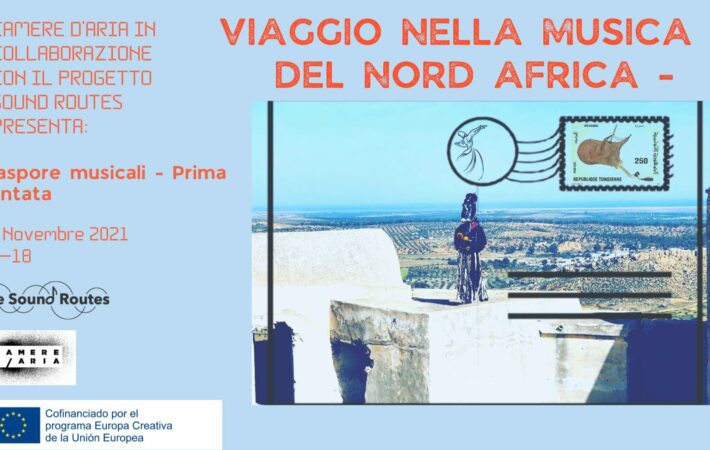 Musical Diasporas – a journey through the music of North Africa

Being a candle is not easy: to make light you must first burn.
Fire has no more smoke when it has become flame”.

RUMI
Preparing for the journey through the currents of thought in North Africa
Observe the bridge between thought and music.
Observe the different genres, the different harmonies…
We will knock on the doors of history and listen …
From the beginning to today Before leaving this cycle of life
We will go to the highest places
In one of your realms of stillnessWe will pass by maestro Battiato to observe the shadow of light …

Writer of poems and reflections in Arabic and Italian.
Born in Egypt, he studied the Koran and Sufi chants as a child and grew up in Turin, where he actively participated in various cultural associations.
In Bologna, he spent time under the arcades of the Faculty of Anthropology to become a social worker and intercultural mediator Passionate about social volunteering, covering various roles including president and collaborator of various cultural associationsMusician, percussionist and Sufi singer.

Taha Ennouri,
musician, drummer/percussionist and composer of electronic music, Taha Ennouri has been involved in the Tunisian alternative music scene since he was young, with various projects in various genres: experimental, rock, reggae, North African music, Electro-Dub… Projects such as Gultrah Sound System, Chabbouba Stambeli urbain, Treeq, Hiya wal Aalam… He draws inspiration from the different realities of world cultures and their musical expressions.
Always seeking to extend his research into the world of sound and percussion, he is very interested in the alliance of cultures and its considerable potential for artistic profusion.

Ali Belazi,
percussionist, lyricist in Arabic and singer of Tunisian origin.
From an early age, he approached music and frequented circles linked to the Sufi musical tradition, popular and folkloric music. This gave rise to her first musical projects that saw different styles and genres interfacing, creating a melodic mosaic in projects such as the groups “Yamam” and “Strava”. He also collaborated for several years with “Mizrap Band”.
Since his arrival in Italy, with the experience he has acquired, he has been trying to pursue this musical path by combining different cultures and traditions.