Behind the Desk Hip-Hop special 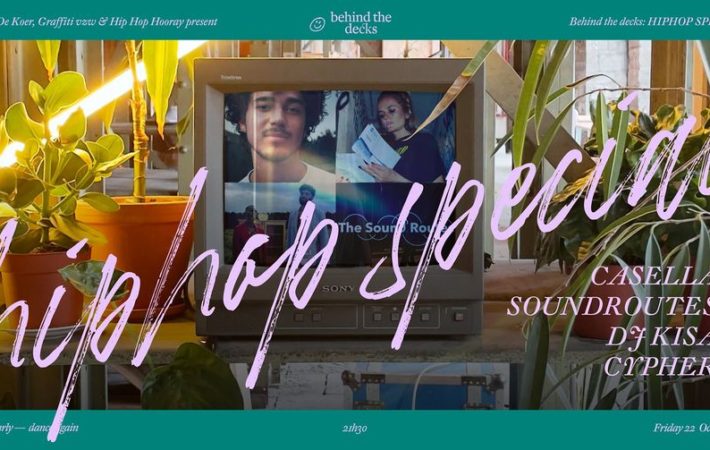 Behind the Desk Hip-Hop special

Soundroutes live from Bar Broei, where we celebrate the birthday of Graffiti non-profit organization . With guests from Italy and Spain!

Casella
If you’ve been to Broei on Saturdays, then you’ve probably already met “Casella & Friends” the music group led by Tomas Casella that organises the “Saturday Knight Jams”. Besides some of their own songs, there will also be a lot of improvisation! Jazzy Funky HipHop all the way!

FaBRECOLLECTIV
FaBRECOLLECTIV is a completely self-made hiphopcollective of Fred Gata and Mustapha from Leuven!
Selfmade! Yup, Fred and Mustapha are two completely self-taught musicians. Fred taught himself to sing after his parents forced him to stop playing beatbox and on the way Mustapha taught himself to play drums, guitar and bass.
The result is a mix between pop, soul and funky hiphop, good energy, vibes and music!

Soundroutes
In the framework of the European project Soundroutes, de Koer invited a varied group of artists from Spain and Italy to Ghent. Under the guidance of Wietse and Fatih they will rehearse for 3 days together with Ghent artists. On Friday 22 October, the result of this exchange can be seen on the Broei stage.

DJ Kisa
DJ Kisa is from Ghent, but her hometown soon became too small for her. For 15 years, she worked from Barcelona. She started the Flava Flava BCN Collective and was DJ at home in well-known clubs like ‘Boulevard’, ‘City Hall’ & ‘Catwalk’. But also Spain was too small and in the meantime she played in all corners of the world and maybe you know her from Tomorrowland or Laundry Day.
On the turntables of DJ Kisa, hip hop (old/new), funk, soul dance hall, afro beats and much more pass by…