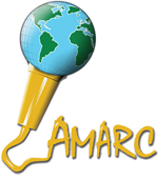 AMARC Europe (Association Mondiale des Radiodiffuseurs Communautaires Europe) is the European representation of the World Association of Community Radios. Community Radios are non-commercial, locally embedded and non-profit organisations that promote freedom of expression and democratic participation, impart media skills and contribute to a pluralistic media landscape. These are initiatives that strengthen civil society especially minorities who have no voice in the mainstream media. The Community Media sector is internationally recognised as the third media sector alongside the public and private commercial media sector

AMARC is a global Community Radio network with 4,000 members including radio stations, interest groups and associations in more than 130 countries. In Europe, the network consists of more than 300 members (radio stations and national interest groups) in 23 countries. AMARC advocates for the right to communicate at the international, national and local level and promotes the interests of community radios as a fundamental aspect of media pluralism, the promotion of democracy and social participation.