The 20th of June, World Refugees day, 6 refugees integration projects co-financed y the Creative Europe programme join their forces organizing 13 events in 7 cities. The events and related projects actively involve refugees and migrants in the cultural production promoting cultural integration, co-creation, collaboration and professional development of artists with refugees and migrant background. The events will be streamed live on facebook and share on this channel as well as project’s facebook page.

Title of the event: One Pac and Fellows in concert
Dates and time: Wednesday 20th June, 8:30pm – 10:30pm
Location and venue: Ceuta, central square [ES] Description: Ceuta is a Spanish city in the Moroccan territory. Every day thousands of migrants try to jump the fences surrounding the city. In Ceuta there are two reception centres hosting around 900 migrants waiting for the asylum or to be transferred to the peninsula. Birane Amar Wane is a Senegalese singer and composer arrived in Spain one year ago and he’s the promoter with the Sevillan drummer José Gómez Romero of One Pac and fellows music project. They will travel to Ceuta to organize a music workshop with the migrant and perform together for the whole population of the city, migrants and local residents. Organized by Marmaduke in cooperation of Elin Association.

Title of the event: Hanin Group in concert [D] Dates and time: Wednesday 20th June, 8pm – 10pm
Location and venue: Berlin, Werkstatt der kulturen
Description: Haneen Choir in Berlin was founded in 2017 and is a female singing group which performs tradition Syrian folk songs. It is a branch of the Haneen Cultural Forum that was founded in the Turkish city of Gaziantep on the 22nd of February 2015 on the initiative of Raja Banout. The Forum is a group of forcibly displaced Syrian women who have decided to face the pain and suffering of war with intellectual and cultural empowerment. The project aims to provide its participants with support as well as preserve the Syrian heritage. The songs are performed in different languages of the Syrian ethnic components including Arabic, Kurdish, Turkmen, Syriac, Armenian, Circassian and Assyrian. Organized by Werkstatt der kulturen.

Title of the event: Afrobeat social laboratory for Sandroutes
Dates and time: Wednesday 20th June, 9.30 PM
Location and venue: Bologna, Chiostro Arena del Sole [IT] Description: The Afrobeat social laboratory is a music initiative led by the jazz musician Guglielmo Pagnozzi. It consists in a weekly music session, taking place the Sunday in the Locomotiv club of Bologna. It is a jam session open to everyone is willing to culturally and musically exchange with others. The collaboration with the Soundroutes project increased a lot the participation of migrants to the laboratory, many of them coming from reception centres. Professional musicians with migrant background such are Reda Zine (Morocco) , Seydu Kyenu, (Burkina Faso) , Karismatique Mande (Cote d’Ivoire), Kalifa Kone (Mali), Moulaye Niang (Senegal) Ibrahim Drabo (Burkina Faso) will perform together with the participants of the Afrobeat Social. More than 30 musicians in the stage for an explosive repertoire including Fela Kuti songs, traditional music from the participant’s countries of origin and original composition made during the laboratory.
Organized by Bologna Jazz Festival in cooperation with Emilia Romagna Teatro Fondazione in the framework of the “Right to the City” Festival “ which is part of the project Atlas of Transition project funded by Creative Europe program (2017, cooperation projects).

Title of the event: Arab Jam Song
Dates and time: Thursday 21st June, 4pm
Location and venue: Werkstatt der Kulturen, Wissmannstr. 32, 12049 Berlin
Description:
On the occasion of this year’s Fête de la Musique, and only one day after the United Nations-proclaimed World Refugee Day: WERKSTATT DER KULTUREN presents a “Best of” of the two highly successful concert series ARAB SONG JAM and ARAB SONG JAM GOES MAGHREB – led by Wassim Mukdad (Damascus/Syria) and Alaa Zouiten (Casablanca/Morocco), the curators of the two series.
Since quite some time ARAB SONG JAM and ARAB SONG JAM GOES MAGHREB have become highlights of the regular concert program at WERKSTATT DER KULTUREN. Their format is based on the Black American jazz jam sessions established since the 1940s: The first set is played by a regular trio or quartet of musicians, while during the second set others musicians can enter the stage to present one or more pieces of music.
Those jazz jam sessions are based on the “Real Book” of jazz standards that evolved in the American jazz tradition. Similarly our series are based on the widely known standards of Arab song, as established and developed by the great singers of the 20th century Arab vocal tradition, such as Cairo’s Oum Kalthoum and Mohammed Abdul Wahab or Beirut’s Fairuz. with a liberal addition of traditional pieces from all over the Arab speaking world.

Title of the event: Simo Lagnawi in concert
Dates and time: Wednesday 20th June, 8pm – 10pm
Location and venue: Edge of the Wedge (The Wedgewood Rooms) 147b Albert Road, Portsmouth PO14 0JW [UK] Description:
Join us for a special evening with Ambassador of Gnawa Culture in the UK, Simo Lagnawi. Simo endeavours to spread understanding of the sacred Gnawa tradition, and to introduce his own movements of Gnawa fusion to wider audiences. So, why not let Simo and his friends transport you to Morocco for an enthralling evening of world music. PLUS, special guests The People’s Lounge. Simo comes to Portsmouth as part of the ArtReach led Journeys 2018 project and Portsmouth Festivities Refugee Week celebrations.

Title of the event: Suspended, In Search of Light by Arabella Dorman – Launch Event
Dates and time: Wednesday 20th June, 6.30pm – 8pm
Location and venue: Leicester Cathedral, 2 Peacock Ln, Leicester LE1 5FQ [UK] Description: To mark World Refugee Day, ArtReach through Journeys 2018, and Leicester Cathedral are delighted to be hosting Arabella Dorman’s Suspended in the nave of the Cathedral. Composed of hundreds of items of clothing discarded by refugees upon their arrival on the island of Lesbos, a stilled explosion will be created, inviting the viewer to contemplate the violent fragmentation experienced by the inhabitants of the garments. The Launch Event will feature live music and a welcome from Leicester Cathedral’s Dean, David Monteith, and the artist, Arabella Dorman.

Title of the event: Training Seminar
Dates and time: Wednesday 20th June 2018
Location: Acta community Theatre, Bristol
Description:
As our contribution to World Refugee Day on 20th June 20118, acta is going global, with a seminar and workshop sharing learning about our work with refugees with 10 students from the USA; disseminating the work of the REACT project (Refugee Engagement and integration through Community Theatre) through the Fulbright Summer Institute with University of Bristol. The 3 hour training and dissemination will include:
– how acta co-creates theatre with refugees and migrant communities in Bristol, including Somali, Sudanese, Eritrean participants.
– the work created in UK, Netherlands and Sicily during the two-year Creative Europe -funded project – REACT Refugee Engagement & Integration through Community Theatre, culminating in the REACT festival in March 2018, and using film of workshops and performances by refugees, taken during the two year project
There will then be a practical theatre workshop, to provide an introduction to the fun and gentle methodologies used by acta facilitators, which sit at the heart of acta’s artistic process of co-creating theatre with marginalised groups.

Title of the event: Shared Stories
Dates and time, 20.06.2018, 17.00 – 20.00
Location and venue, in Gdansk, Poland, venue to be confirmed
Description:
Shared Stories is arranged by the Arteria Asociation in Gdansk as part of the Shared History project and will be based on storytelling. The first part of the event will be a storytelling workshop for a group of women, both immigrant women and those representing Poland as the receiving society. During the workshop they will share stories of their lives. Using various storytelling methods they will present these histories to each other. The second part of the event will be documentation of this process as short interviews – recorded as photos, films and text. The workshop itself will be an ethnographic research which results will be later described in a short summary.

Title of the event: Shared History, art exhibition
Dates and time, May 5 – August 19 2018,
(during the week of this joint communication: June 21: 11-19, June 22: 11-16, June 23-24: 11-17.)
Location and venue, Färgfabriken, Lövholmsbrinken 1, Stockholm, Sweden
Description:
Shared History is a project that brings together newly arrived and established artists in the Baltic Sea Region to explore critical methods of narration and co-creation in a time of polarised discussions about history and identity. Shared History is a cross-disciplinary project with the goal of critically connecting and artistically interpreting the different reactions on the refugee situation that is strongly affecting, shaping and dividing the European Union. By creating a space for creative and critical dialogue for writers and thinkers Shared History aims to investigate history and narrative as a process for participation and interpretation, rather than a fixed set of facts. The exhibition at Färgfabriken is one of three exhibitions created within the project, showcasing works produced during months of collaboration between artists that were paired together to create new works springing from the concept of Shared History. The artists have focused on themes like inclusion and isolation; privilege and responsibility; how pressure affects individuals; the feeling of belonging and integration in relation to nature.

Title of the event: GODS – Theatre Performance
Dates and time: Saturday 23rd of June 2018
Location: Teatr Powszechny, Warsaw
Description:
Humans live in the Imaginary order. Most aspects of social life rely on our belief in things that, in fact, are not there; we make decisions believing that there will be a future, very often a future dependent on factors not existing in the real world (for example, we take on a loan believing that in 20 years we will be able to keep paying back interest). It is the belief in the Imaginary that most distinguishes humans from other animals and helps create narrations which, among other things, cause the human to declare himself “god” in relation to other beings or people. In a multi-cultural group of amateur performers and people involved in art, we confront the topic of faith as a factor organising our lives. We consider how our belief in the free market, universal justice, a world without borders, sustainable development, or Poland being the Christ of Nations impacts our daily choices and our functioning in the world. We draw from the group’s members’ direct experiences – their perceptions of postcolonial relations and their religious beliefs. We confront our beliefs with superstitions, stereotypes, and the foibles of those beliefs. In other words, we attempt to shed light on the largest difference between the human species and other animals. The performance involves a group of 70 participants – between them – group of 40 actors-amateurs (refugees, migrants, asylum seekers and Polish), 20 musicians (also amateurs and professionals – Polish and with the migrant background) and 10 videomakers (the composicion of the group is also mixed) 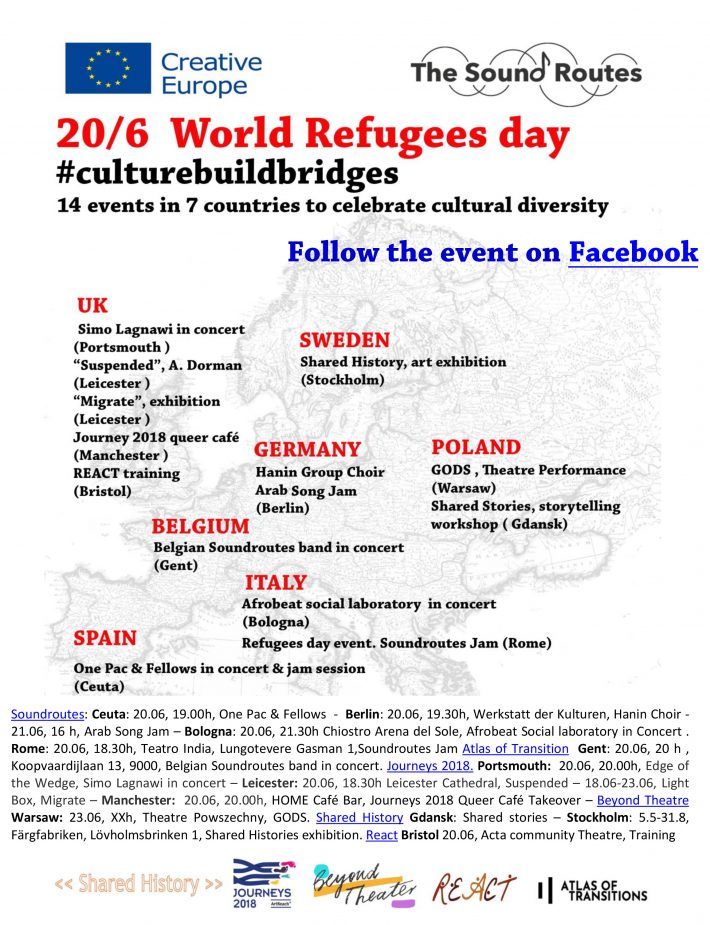