‘First a musician, then a refugee’

On Friday 21 December the social and artistic centre de Koer will present the première of the documentary film Shadow Music. Filmmaker Berber Verpoest joined forces with the Ghent-based musicians of the Soundroutes Band and followed Syrian and Afghan musicians starting out a new life in Flanders. ‘It’s so enriching to bring together all these different artistic traditions’

‘When I used to go on tour in Europe, I was a musician. Now people see me as a refugee’, says Shalan Alhamwy from Homs. He was a violinist in the Syrian National Symphony Orchestra, taught at the conservatory and composed music for films and international orchestras. When he fled to Belgium, he had to start from scratch. ‘Music helped me to find my way. To be able to show, as a counterweight to the negative image of refugees, that we also have a rich culture and talents.’

Shalan Alhamwy is one of the five musicians of the Soundroutes Band, an initiative of Ghent’s social and artistic centre de Koer and the European project Soundroutes. Notes to get closer. With the support of the European Commission and the City of Ghent’s Department of Culture, de Koer organised seven jam sessions over the course of 2018 in which professional and semi-professional musicians of various cultural backgrounds shared the stage. After two selection rounds and the first three jam sessions, the permanent ensemble band was established, consisting of Jamal Moussaid (drum, bass), Shalan Alhamwy (violin), Sangar Suhail (vocals), Robbe Kieckens (percussion) and Jonas De Rave (keys).

In the documentary Shadow Music, the musicians speak of the mental and physical obstacles they had to overcome, first in fleeing their home countries, and then in building a new life in Belgium. Singer Sangar Suhail had a number of hits in Afghanistan, but had to flee his country in 2010 when conflict flared up. ‘In Afghanistan music is seen by many as something devilish.’ He didn’t know anyone in Belgium and couldn’t speak the language. The music was different, too. ‘But Soundroutes taught me to persist without fear. It realised it wouldn’t be easy, but it’s just a matter of learning.’

Alhamwy, too, was challenged in the past year to leave his comfort zone. ‘I was trained classically in the Arabic tradition. I had never played Indian or Afghan music. It’s so enriching to bring all these different artistic traditions together.’

Percussionist Robbe Kieckens, a familiar face in Ghent’s live music scene, hopes that the Soundroutes Band can continue to hold its place in concert programmes. ‘These collaborations are an asset to us Belgians, too – personally, I have enjoyed our performances enormously. Refugees bring an enormous musical tradition along with them; it breathes new life into the scene. It’s fantastic to arrive at a coherent sound based on all these different influences.’

de Koer is an artistic and social centre in Ghent’s Brugse Poort neighbourhood. Together with Berlin’s Werkstatt der Kulturen and the Bologna Jazz Festival, among others, de Koer lent its support to Soundroutes, a European project that builds bridges between local musicians and newcomers.

Berber Verpoest is a journalist and documentary filmmaker. He has directed two reports for Vranckx and De Nomaden on Canvas, among other projects. Last year he won the Emerging Director Award at the Al-Ard Film Festival in Italy for his documentary Home.

The première of Shadow Music will take place on 21 December, at 7 pm at de Koer, Meibloemstraat 86, Ghent. Entrance is free of charge and seats can be reserved by sending an email to lander@dekoer.be 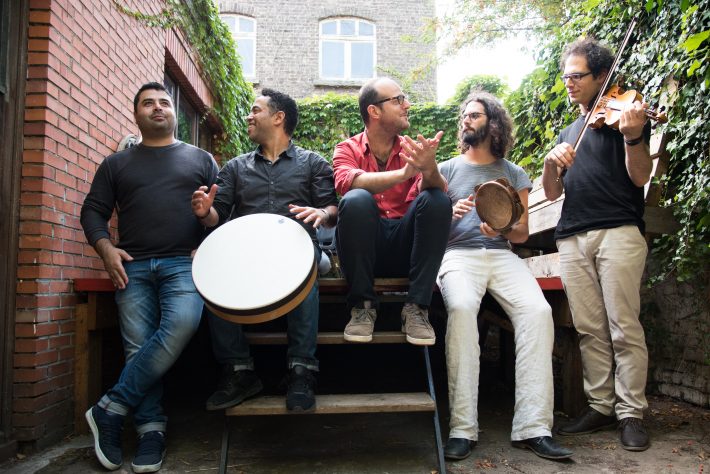