In Morocco, Alaa Zouiten’s musical career began as a master of the oud, the Arabian lute, and led from training at the Conservatoire National de Marrakech to the sideman of the fusion band “Jbara”.

He played with the band at numerous Moroccan festivals including the Essaouira Gnaoua Festival, the Grand Festival de Casablanca and the Mawazine in Rabat. With a scholarship from the Arab Fund for Arts and Culture, Alaa Zouiten is working on his second album in 2015. In these compositions he experiments with the stylistic, technical and aesthetic possibilities of the oud. The result is a fascinating mix of Arabic, Andalusian jazz and rock.
This potential is the basis for Alaa Zouiten‘s collaboration with top-class musicians* in various fusion projects in the musically cosmopolitan city of Berlin. Alaa Zouiten also curated the very successful projects of the Werkstatt der Kulturen, the “Arab Song Jam” and the “Gnaoua Festival Berlin” in 2018. Other important stops for Alaa Zouiten were the musical direction and performance with the “Global Arabian Music Orchestra” in the Berlin Philharmonie, the performance with the “Requiem for Syria” in the Dresden Philharmonie and the tour of “TALKING OUD 2018” in France and Germany.
Born and raised in Beirut, Tarek Yamani is a New York-based Lebanese-American award-winning composer and jazz pianist who taught himself jazz at the age of 19. Since the release of his debut album “Ashur” in 2012, Tarek has reinvented classical Arabic music within the framework of Afro-American jazz in a genre often referred to as “Afro-Tarab”, which in his second album “Lisan Al Tarab: Jazz” is the clearest expression of concepts in classical Arabic.
After being commissioned by the Abu Dhabi Festival, Tarek researched and wrote new music based on the largely unexplored rhythms of the Arabian Peninsula. The new work, entitled ” Peninsular “, was published with critical acclaim and as ” world jazz that can be heard nowhere else ” (TSF Jazz), “luminous music anchored in jazz harmony and Arab traditions” (Télérama), ” striking, rather untypical, rich, varied … to insert urgently in your playlists “(Jazz Magazine) and ” the most beautiful surprise of the beginning of the year ” (Jazz News).
Roland Satterwhite is a multi-instrumentalist and singer who has lived in Berlin since 2008 when he moved from New York City. Besides playing the violin and singing in the popular Berlin Balkan swing band Django Lassi, he continues to develop and experiment as a soloist and works on other projects.
Amine Bliha is a Moroccan percussionist and composer. He is considered one of the main representatives of the new generation of Moroccan musicians, who strongly identify with sub-Saharan music culture. His energetic playing as well as his extensive knowledge of various musical genres (Gnawa, Latin Jazz, Funk, Chaabi …) make him one of the most popular sidemen of Morokko. Meanwhile he accompanies Hindi Zahra, Majid Bekkas, Alaa Zouiten, Mehdi Nassouli… Richard Müller was born in Russia and grew up in Germany. His parents (both music teachers) brought him into contact with music at an early age. So he learned keyboard, piano, guitar, clarinet, until finally in the school band a bass player was needed. This was followed by a visit to the Junge Akademie in Hamburg. At the same time he completed his education+pedagogical year at the Hamburg school of music. After his community service he completed a Bachelor of Jazz course at the Jazz Institute Berlin (Hans Eissler/UdK).
Alaa Zouiten (MA) – Oud, composition Roland Satterwhite (USA) – Violin Tarek Yamani (LEB/USA) – Piano Richard Müller (RUS/GER) – E-Bass Amine Bliha (MA) – Multipercussions
Alaa Zouiten’s web-site 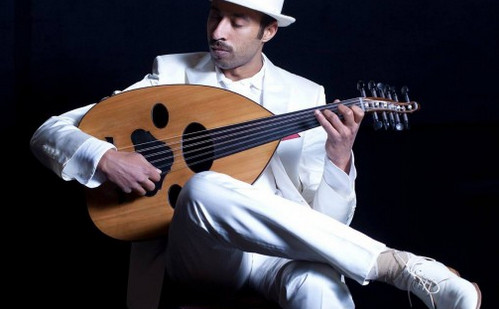